Where are the murals of Eduardo Kobra in New York City? 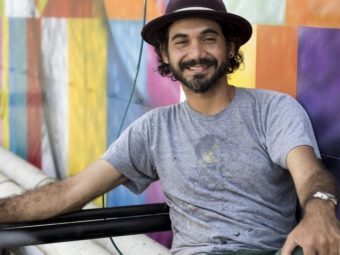 Alex of BPVNY is a big fan of the Brazilian artist Eduardo Kobra, and he wrote this article for us. Kobra returned to New York City in August 2018, and he is painting one mural after another.
I invite you to discover his art in the streets of New York, classified by Alex in chronological order.
Street-art works are for everyone, and they are free. Enjoy them!

Who is Eduardo Kobra?

I have to briefly introduce you to Eduardo Kobra, a native of Sao Paulo (Brazil). He grew up with the American hip-hop culture, as he used to be part of a breakdance crew. This environment led him to specialize in the plastic arts, painting, and graffiti.
He worked in a bank, but he left his job to create his studio in 1995, Studio Kobra.
He developed his style starting with black and white works, and then added colors. His first murals appeared in Brazil in the 2000s. It is when he arrived in New York in 2012 that he gained a lot of popularity thanks to “VJ Day in Times Square” or “Kiss in Times Square” that could be seen from the High Line. 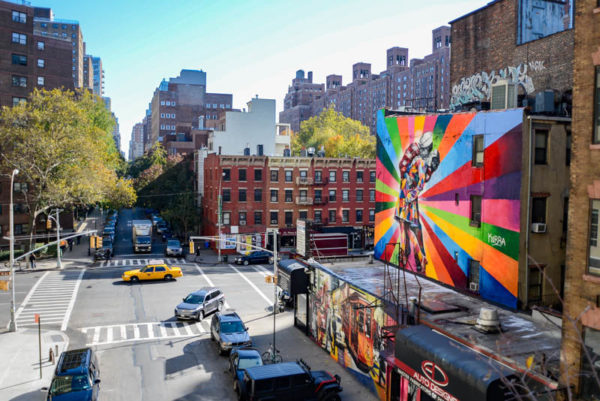 And now? Kobra has created more than 500 works of art in 17 countries, some of which are in New York City.
You can easily recognize his style:
– very realistic images, inspired by photographs and personalities such as Salvador Dalí, David Bowie, Jean-Michel Basquiat, Nelson Mandela, Gandhi, John Lennon, Bob Marley, Edith Piaf, Albert Einstein, Michael Jackson…
– gigantic works: his specialty is the murals
– kaleidoscope of colors, predominantly red and yellow,
– works related to societal matters,
– themes that deal with the place where he paints them
I invite you to follow Eduardo Kobra on his official website as well as on his Instagram account where he publishes the creation of his work.

This work is a tribute to 2 artists, Andy Warhol and Jean-Michel Basquiat, plus Michael Halsband who took the pictures of the first two!
Kobra is a fan of the three, and with this work, he pays them homage. 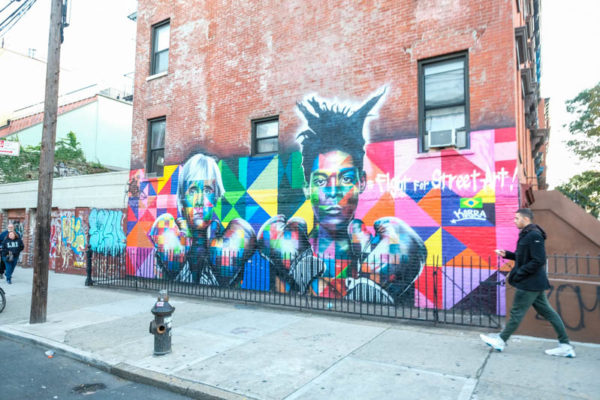 10 months after David Bowie passing, Kobra painted Ziggy Stardust, the famous fictional character created by the singer in the 70’s. 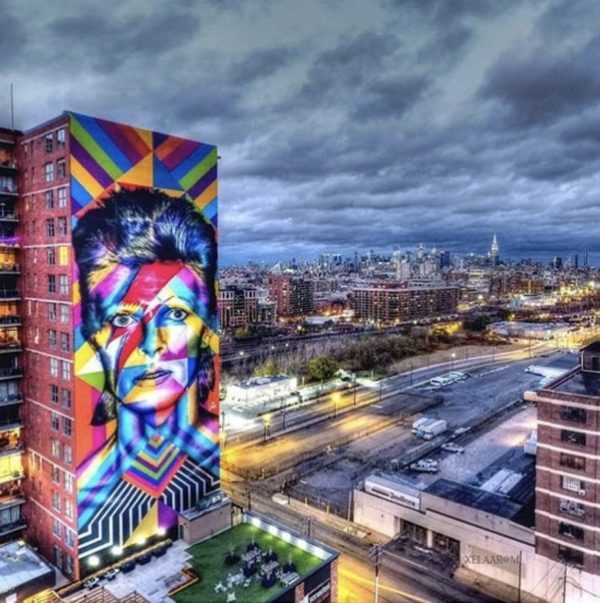 In this magnificent mural you can see Michael Jackson as a child and adult. It’s in the East Village. 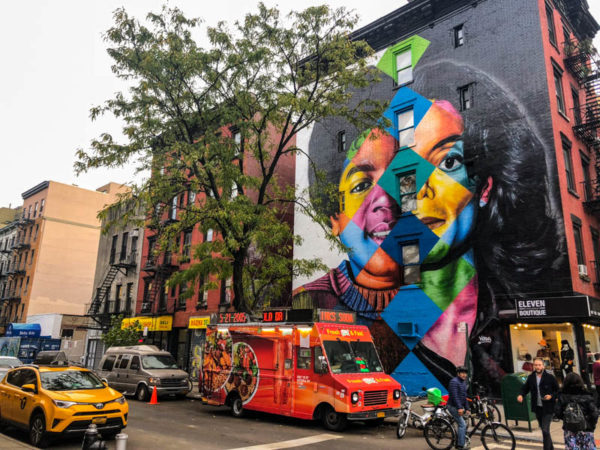 Right next to the High Line, Kobra portrayed Gandhi and Mother Teresa, two figures of tolerance. 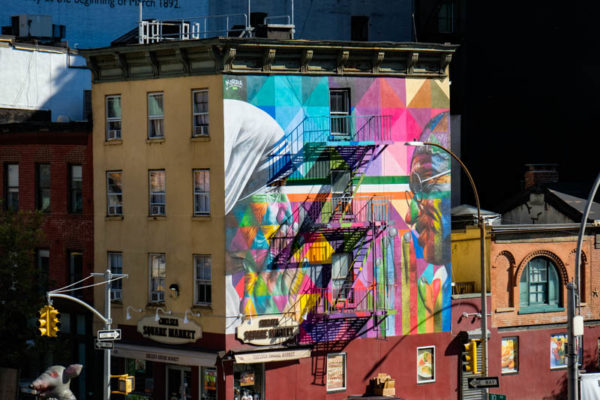 This work calls attention to mass shooting at schools. 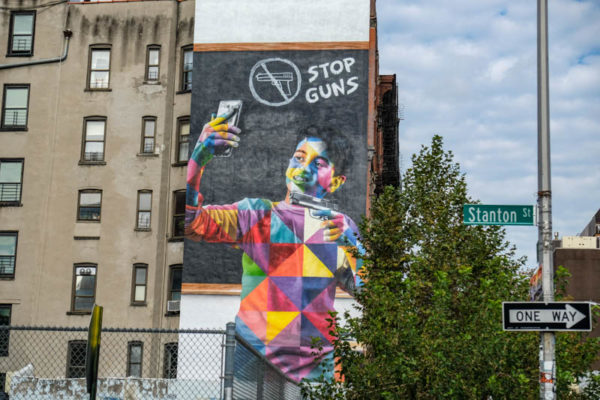 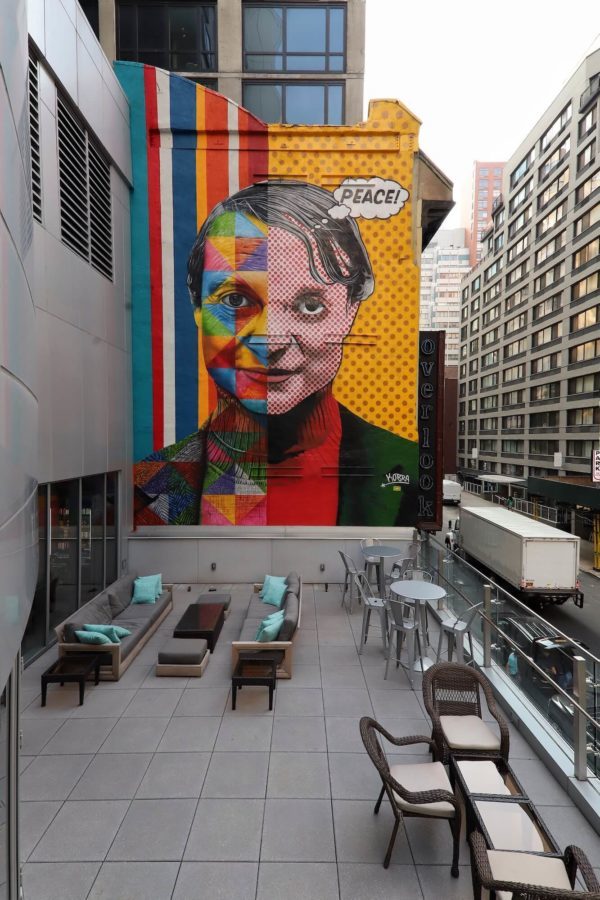 In between two buildings in Brooklyn, Frida Kahlo and Diego Rivera are one person. 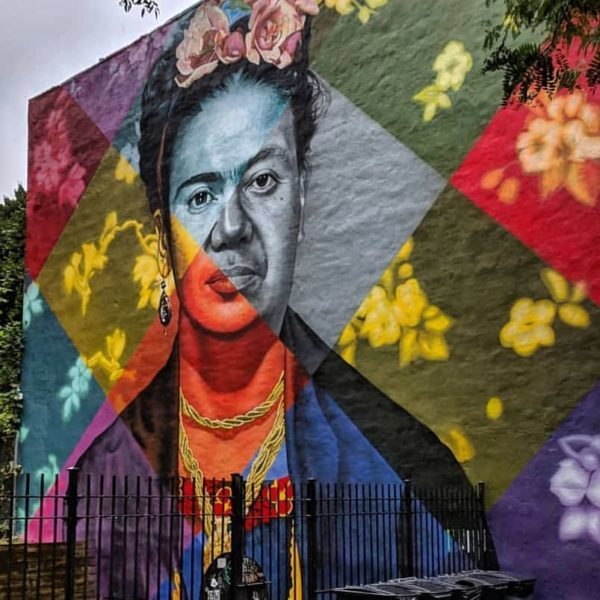 This is the representation of the Statue of Christ looking over Rio de Janeiro. 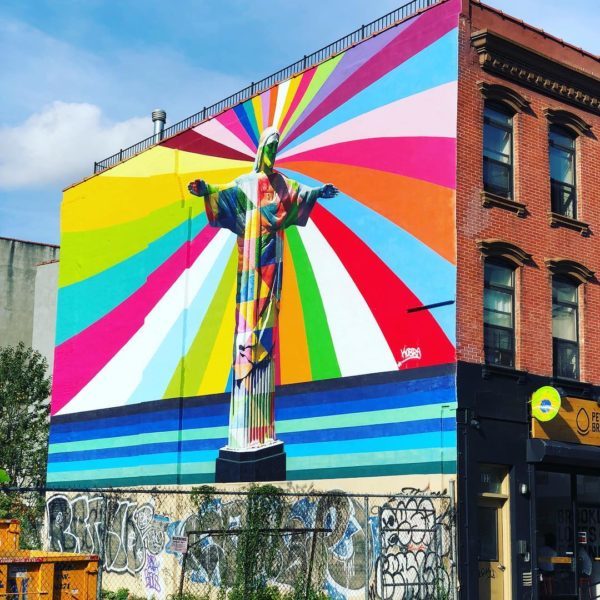 Kobra painted this mural in honor of the FDNY firefighters who fought and lost their lives during the September 11, 2001 attacks. 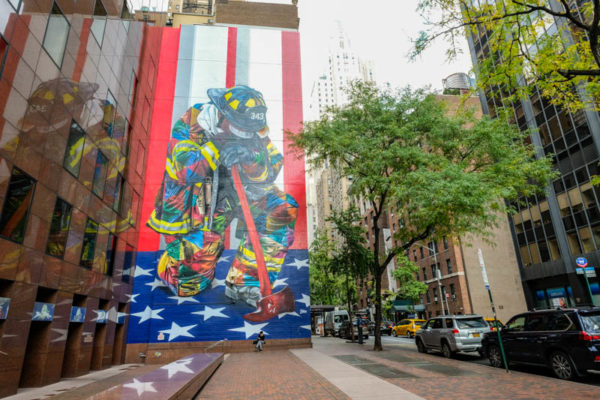 Kobra is a fan of Albert Einstein. He already did a similar work in Sao Paulo, now another is on the streets of New York. The genie is on a bike with a sign indicating that peace equals squared love. 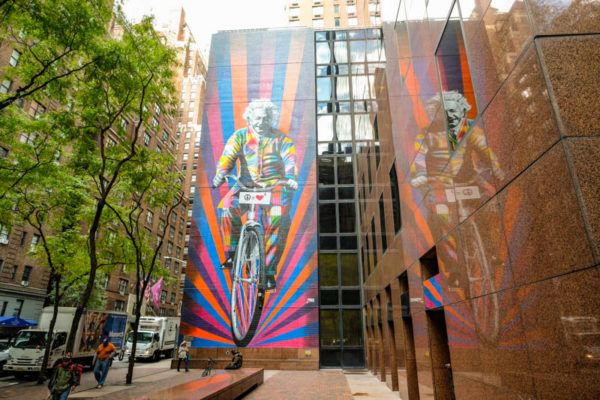 In this work, Elvis who appears as a military man with a helmet indicating that “war is hell”. 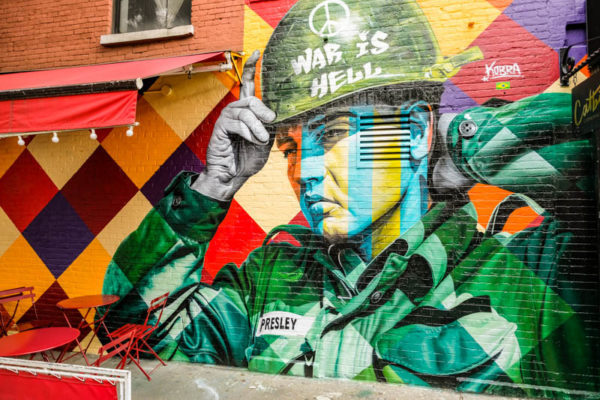 In this mural he paints Albert Einstein who paints his love for New York (squared of course). Who is the genius now? 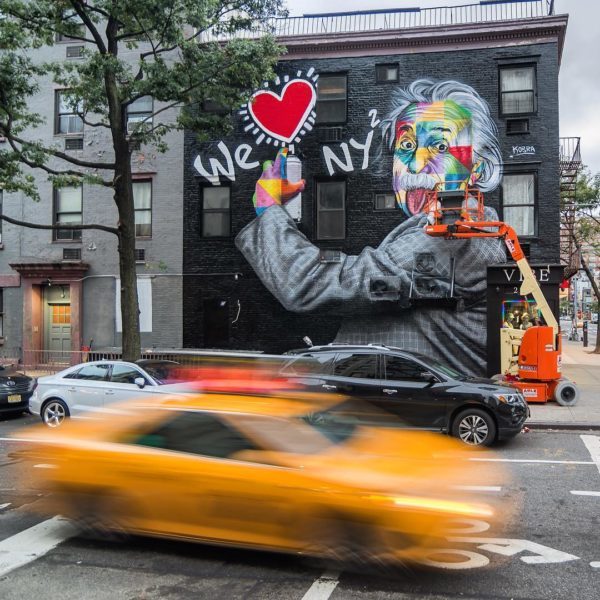 “Colors of Liberty” – Lower East Side

The Statue of Liberty according to Kobra, must have many colors. 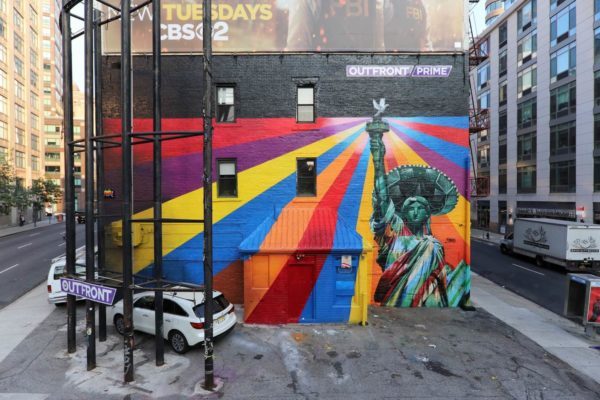 The club of the 27 are these artists who died too young, at 27 years old. You will recognize Janis Joplin, Kurt Cobain, Jim Morrison, Jimmy Hendrix y Amy Winehouse. 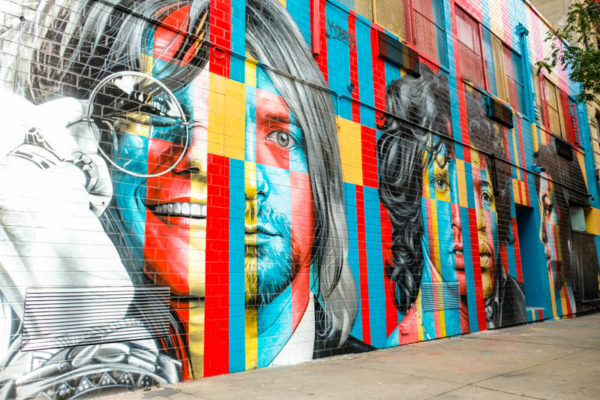 Kobra denounces war with this mural representing C-3PO of Star Wars, with a sign at hand saying Stop Wars. 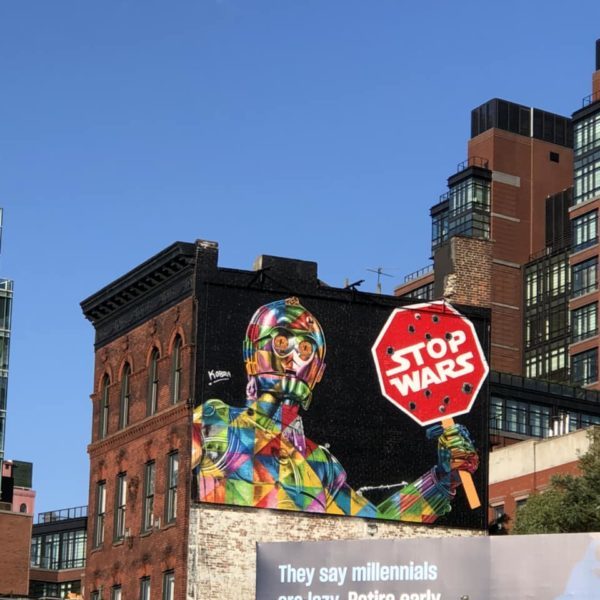 The map of the murals

With this map, you can locate the works. If you plan to visits these neighborhoods, take a look at the walls!

I hope that this small article makes you want to discover these magnificent works of Kobra. I like them all! What is your favorite? 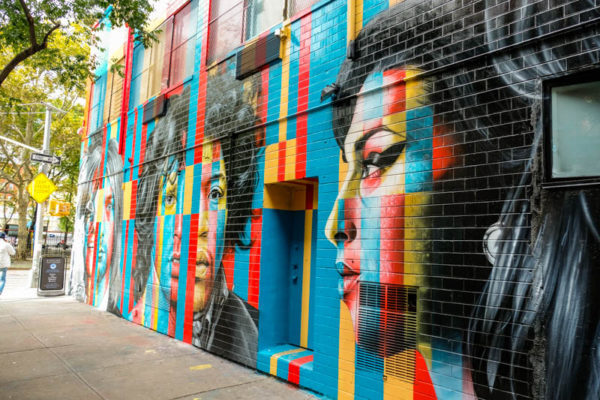