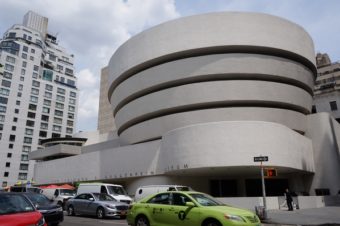 I guess you’ve already heard about the Guggenheim Museum in New York. From the outside, it is famous for its round shape like a cup of coffee.
Actually, it is one of the largest museums in the city, located in the Museum Mile. It is a portion of 5th Avenue along Central Park where you will find the Metropolitan Museum (MET), the Museum of the City of New York and the Museo del Barrio. Do not miss it if you like contemporary art!

History of the Guggenheim Museum in New York

There are several Guggenheim museums in the world, such as Bilbao, for example. The one in New York was designed by architect Frank Lloyd Wright. He started to work on this project in 1943. However, due to several events such as the cost of raw materials in this time of war, as well as the death of Solomon R. Guggenheim, construction began in 1956. The museum finally opened on October 21, 1959, six months after the architect’s death. 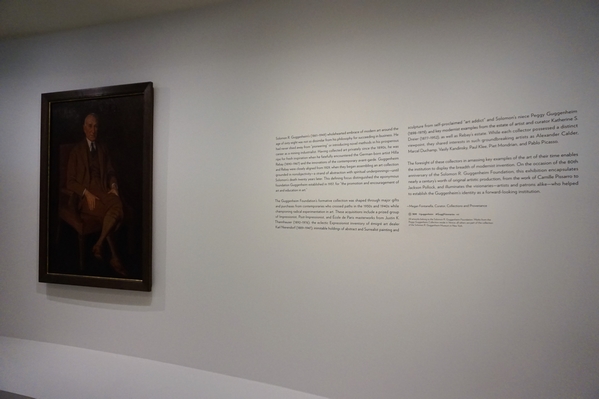 Then in the 90s they did several works to open all the floors to the public.
In 2008, the museum was named National Historic Landmark. It was after included in the UNESCO World Heritage list in 2015.
The museum itself is a work of art! 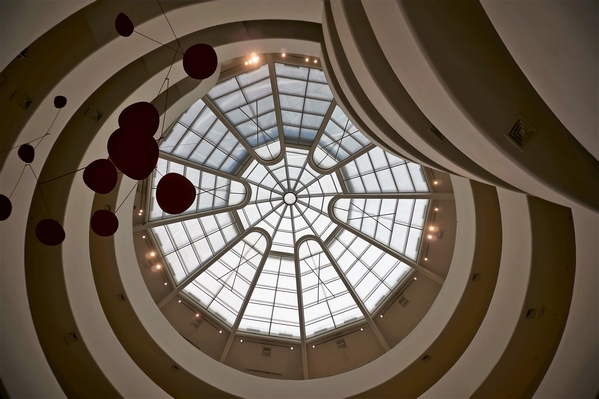 It is divided into two parts, a tower and the spiral. As a matter of fact, the temporary exhibitions of the museum are in both parts.
In the tower there is a cafeteria, Cafe 3, where you can buy snacks and hot drinks.
In addition, you can go to lunch at The Wright restaurant, an American bistro imagined by Andre Kikoski on the ground floor of the museum. 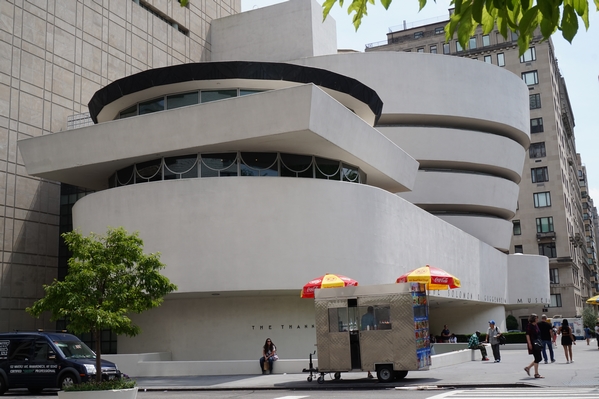 On the ground floor and 5th floor, you can buy souvenirs and replicas. 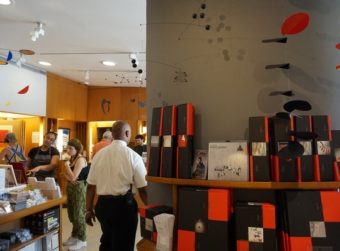 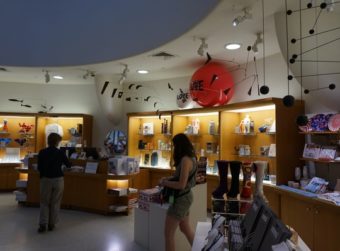 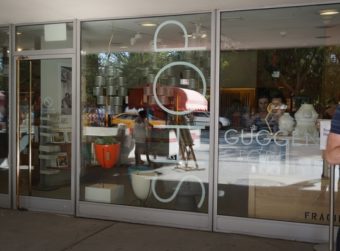 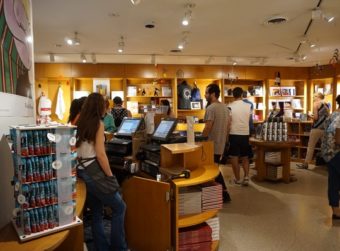 The most impressive part is the spiral. It looks spectacular from the outside, and even more from the inside. 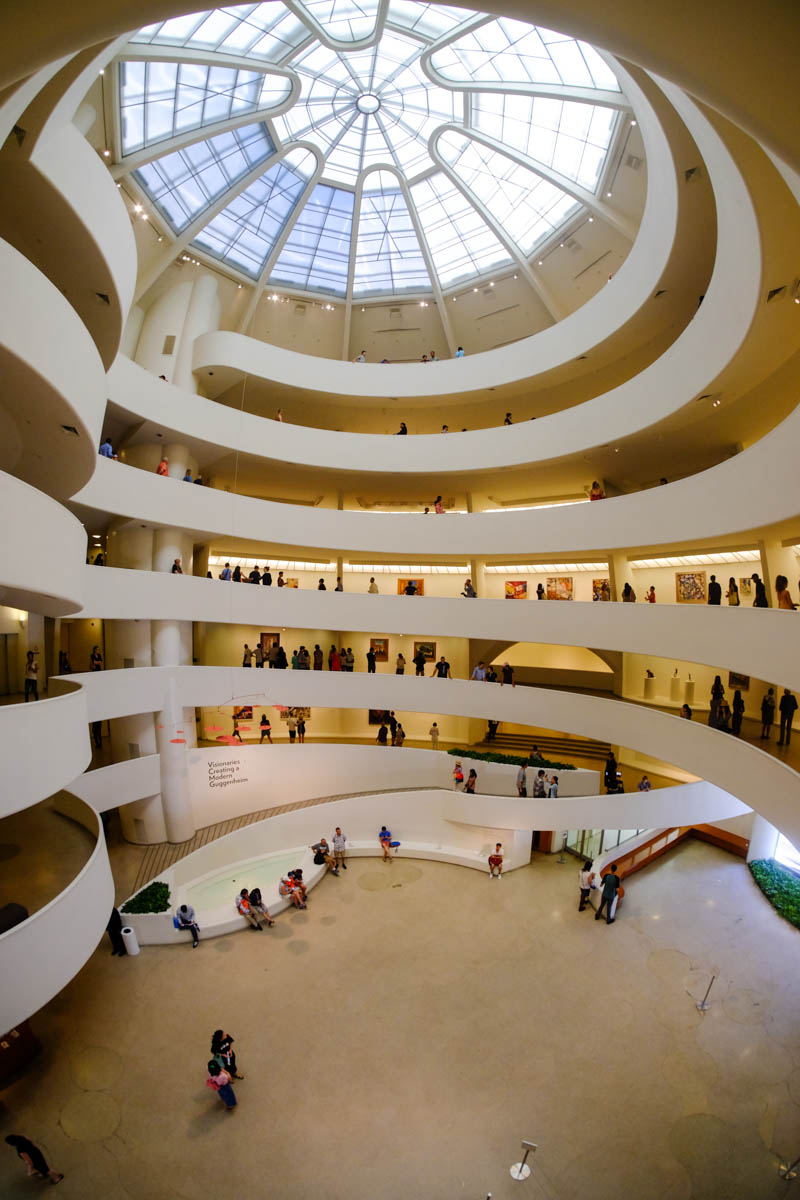 How to visit the museum?

After leaving your belongings at the coat check, you can start visiting the museum using the ramp, part of the spiral. Another option is to go up to the last floor with the elevator and go down via the ramp. In fact, everyone can live its own experience of this unusual museum, which presents art in an open and continuous space. 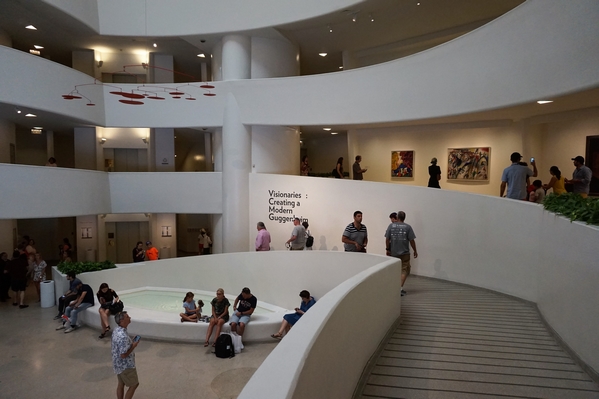 The works are placed on the walls of the large ramp and in small rooms. They seem to be a small labyrinth. Therefore, one goes from one exhibition to another without noticing it! 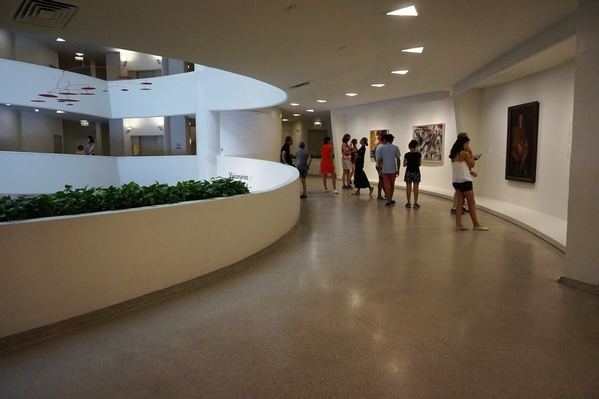 What to see in the Guggenheim?

The Solomon R. Guggenheim Foundation started to present works in the Museum of Non-Objective Painting in 1939. In other words, it is non-figurative or abstract painting, an artistic movement from the beginning of the 40s. It is then modern, contemporary art.
The exhibitions are temporary. On the day of my visit I saw Visionaries: Creating a Modern Guggenheim. Each level presented the collection of the foundation with works created between the end of the 19th century and the 20th century. You can still appreciate works by Alexander Calder, Marcel Duchamp, Paul Klee, Paul Cezanne Piet Mondrian, Pablo Picasso, Vasily Kandinsky… 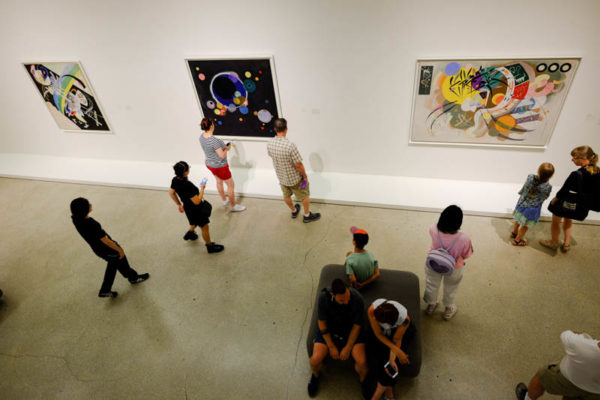 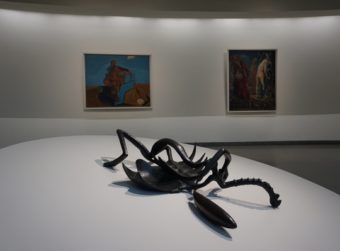 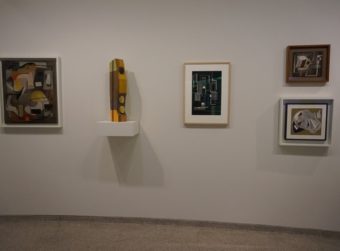 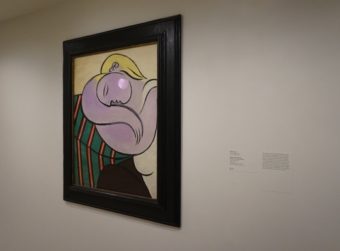 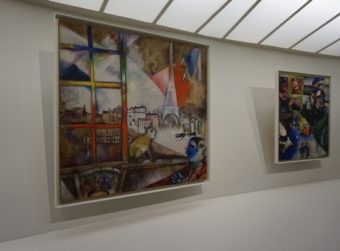 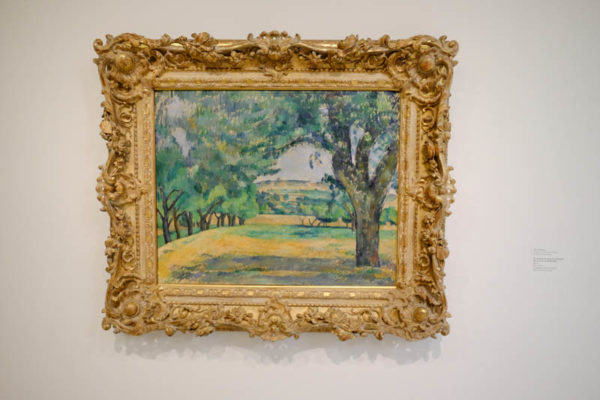 In the tower, I saw the exhibition Mystical Symbolism: The Salon of the Rose Croix in Paris, 1892-1897; 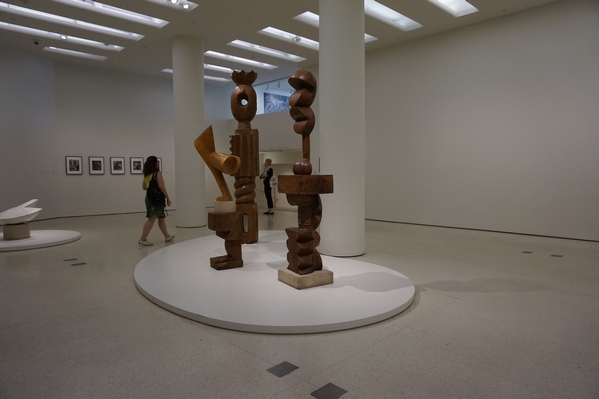 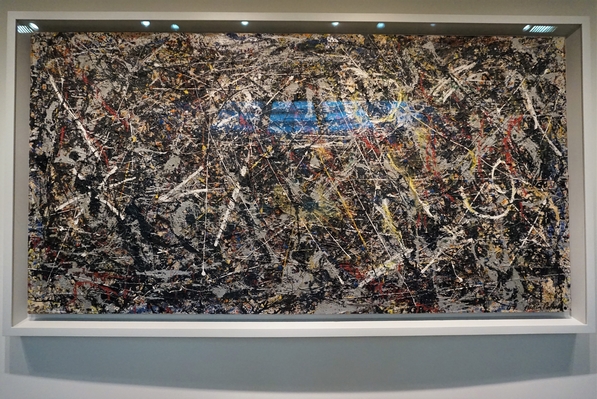 I recommend that you check the museum calendar to get the latest news about the exhibitions in progress.
In addition, the museum offers free programs for families or children. Plus, there are free guided tours every day at 2pm. 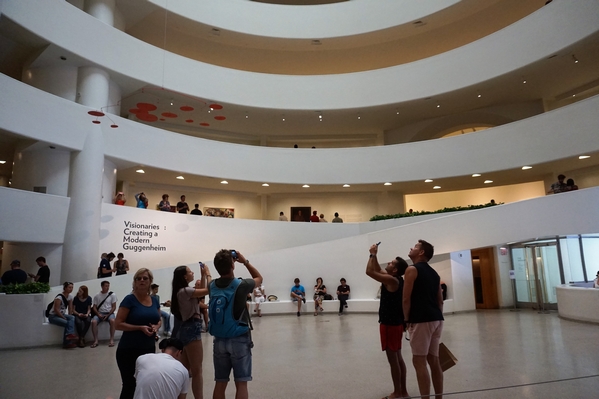 How much is admission?

The ticket costs:
– $25 for adults,
– $18 for students and seniors (65 years old)
– Free for children under 12 and museum members.
Every Saturday between 5pm and 8pm, the ticket is “pay-as-you-wish“. However, it does not mean it’s free, they recommend paying $ 10.
This museum is also included in almost all the pass of visits. 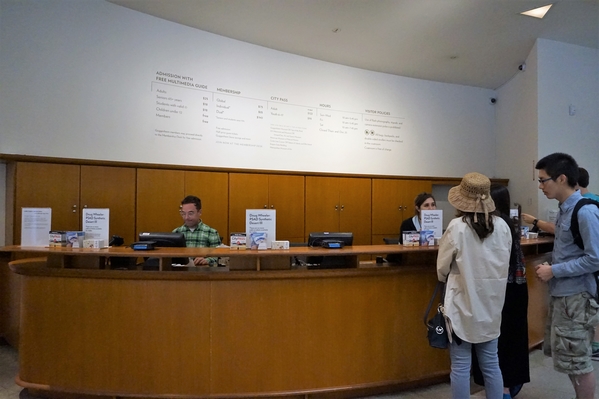 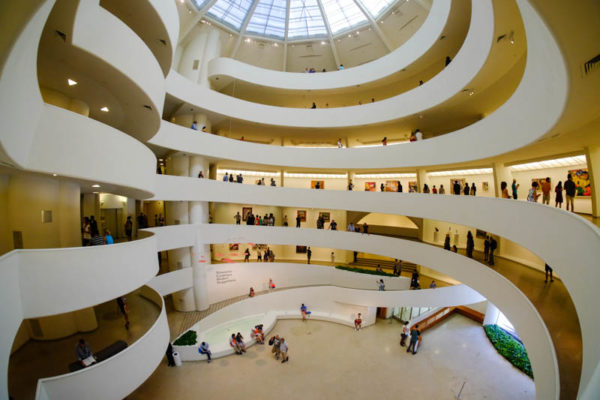 Before visiting the museum

Some things you need to know:
– You should leave your backpacks, umbrellas and strollers at the coat and baggage check.
– You can take pictures for personal use, but tripods and extension poles are prohibited.
– Only pencils, sketchbooks and notebooks are permitted.
– The museum has free WiFi connection. Download the Guggenheim app before visiting it to get more information about the exhibits.
– The museum is accessible with programs adapted for everyone. 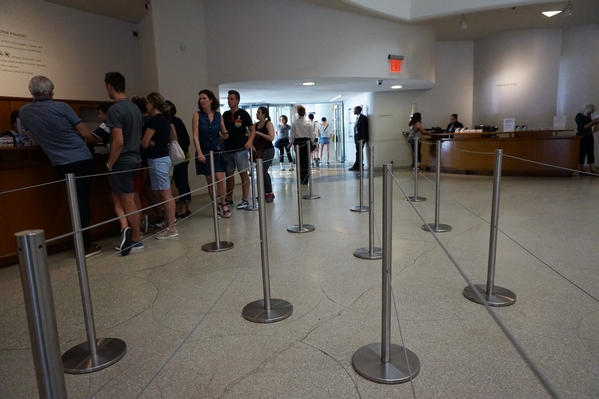 Where is the museum?

It is located on 5th Avenue, next to Central Park.
Address: 1071 5th Avenue, New York, NY (between 88th and 89th streets).
Website: www.guggenheim.org

The Guggenheim Museum is a world icon of contemporary art. You’ll love to visit it during your trip to New York!
I can understand that you don’t want to pay for the visit. But if you pass by, take the opportunity go through the main entrance to see the spiral from inside. It is impressive and above all, free. 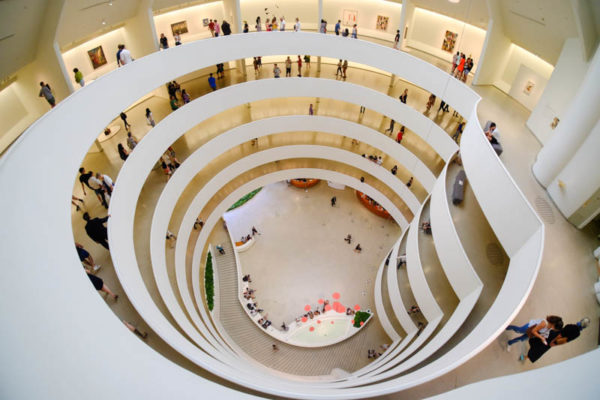