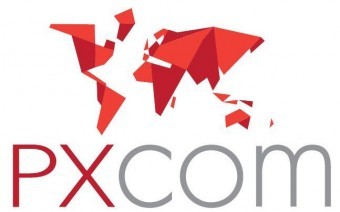 Who has been on a plane lately, playing with the screen located on the seats? You should have realized that the programs are quite old and outdated.

Apart from the films, some radios and games, there is not much to do… I mean, if we compare it with our Smartphone or Tablet.

Well I have some good news because I’ve just found an alternative proposed by PXCom. This company is developing a new concept dedicated to in-flight entertainment.

I like the project which is created by some of my friends 😉 Then I wanted to share with you what it is, hoping that we will soon be able to use it on the plane.

Summary :
PXCom the company proposing innovative multimedia applications onboard
├ What is PXCom?
├ What is PXPoint for?
├ How will the PXApp work?
└ Conclusion

It is a new company that I recently discovered, implemented in Bordeaux, France. From a little over a year ago, they have been developing two products (PXPoint and PXApp) that will catch the eyes of airlines and tourism companies thanks to the possibilities that these systems offer.

It already exists in some aircrafts. It is a moving map, similar to “Google Earth” with geopositioned points of interest integrated.

It’s a step ahead to the end, hopefully soon, with three actual views maps which you can see “city of departure and arrival, zoomed in at the country level, and zoomed in at the region level” 😀

PXPoint uses all the technology that exists today. This system shows you the city of departure and arrival but also allows you to zoom anywhere. Like an iPad styled tablet, this system displays the view of what you want, towards the left or right of the aircraft and thus contemplates any point of the globe. 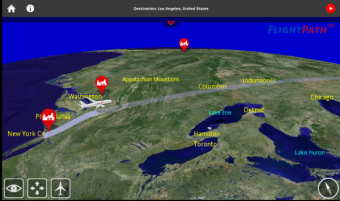 These kind of map are so much fun! Well I am amazed that with the technology we have with our Smartphone and tablets, the airlines are not able to propose to us a similar service. With the rate that we pay for the flight, we could expect to have more modern displays.

What I like is that you can extend the map and see in more detail the cities, as New York City in the photo below. 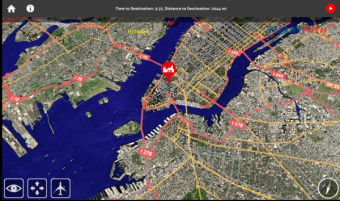 There are some points of interest on the screen, monuments, museums, hotels, restaurants … and certainly in the near future my travel tips 😉 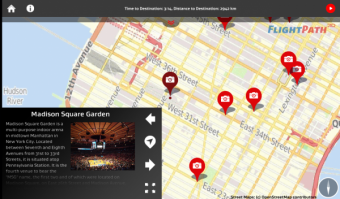 By clicking on the points of interest, a window appears, describing that spot, indicating schedules, with photos… 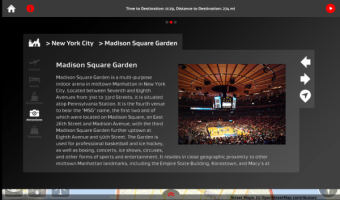 The map is much more interactive and allows you to discover new places.

How will the PXApp work?

PXApp is the next stage. It is a multimedia application that will allow tourism stakeholders to create interactive content, that makes it seem as if this were a website.

For example the MET in New York could create a page with the map of the museum, giving explanations and indicating current exhibitions, show photos, videos and audios.

Then you can insert a QR Code to save the locations and websites. In the near future, you’ll be able to book your tickets from the aircraft!

You will have noticed that this is a project that I really like. What happens is that I am very disappointed with the outdated services proposed to us onboard.

PXCom promises a change in our way of traveling, with more fun and interactivity. We could also take advantage of our long-haul flight to NYC to prepare our trip 😉